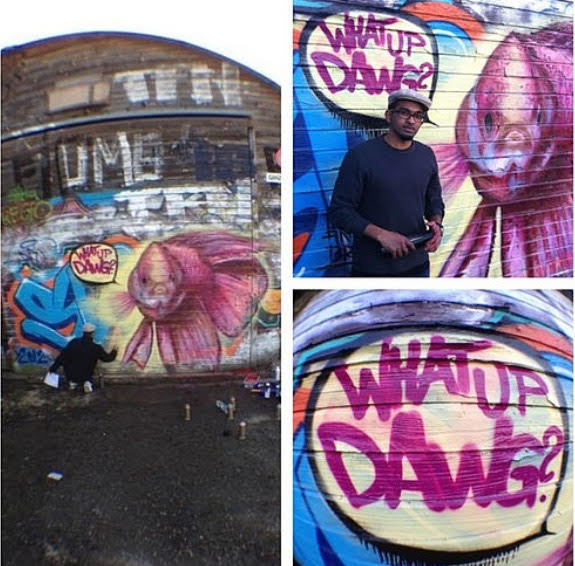 The tagging history started in the year 1967 down in the North American subway writing or drawings that have been scribbled, scratched or painted illicitly on a wall or other surface.

Graffiti holds special significance as one of the elements of hip hop culture. Four major forms of creative expression that came from the Bronx, New York and spread to the rest of the world. Graffiti represented the visual in the early days of hip-hop, all of these elements were deeply intertwined. Graf artists were very often B-boys , emcees and DJs as well. At the hottest parties, you might see an artist doing his thing on a wall while the DJ spins and scratches, the emcee revs up the crowd, and the B-boy battling each other on the dance floor.

Although it might not always be legal art, graffiti art still deserves respect. These street artists risked punishment and possible jail time in order to get their street art up by spraying on walls, using wheat paste, and painting with stencils. This is often within public view but, how many of y’all are aware the existence of this Tamil graffiti talent from Zurich. JAY, artiste name “Bang N Brush” it’s more a description of his artwork.

Started with comical drawing in his very young era since the age of 12. He made a reputation for himself in Swiss art scene over the past decade. The artist was known for being able to seamlessly blend various styles to create an approach that was pulled of graffiti yet uniquely his own who has won Street Art Contest in year 2011. BBC Radio and CH Tv recognized and invited him for an interview to share about his art journey. Just like many other great street artists, Jay moved to paint canvases and wood paintings, this decision led to his worldwide recognition and made him on making banknotes.

Credited as a developer of several classic graffiti styles, Jay remained very active in the contemporary art world all these years who now travels around the world sharing his talent to the people out there. This year Jay is working on his own art exhibition, promising to happen end of this year. It’s a crossover from graffiti, photography and Tamil culture.

If you are at his town or manage to bump into him, do get his freehand sketch with your name on it because this dude is good in sketching it in less than 5minute.

Check his artwork on instagram.com/bangnbrush